Benj has more to say

In collaboration with AAWA 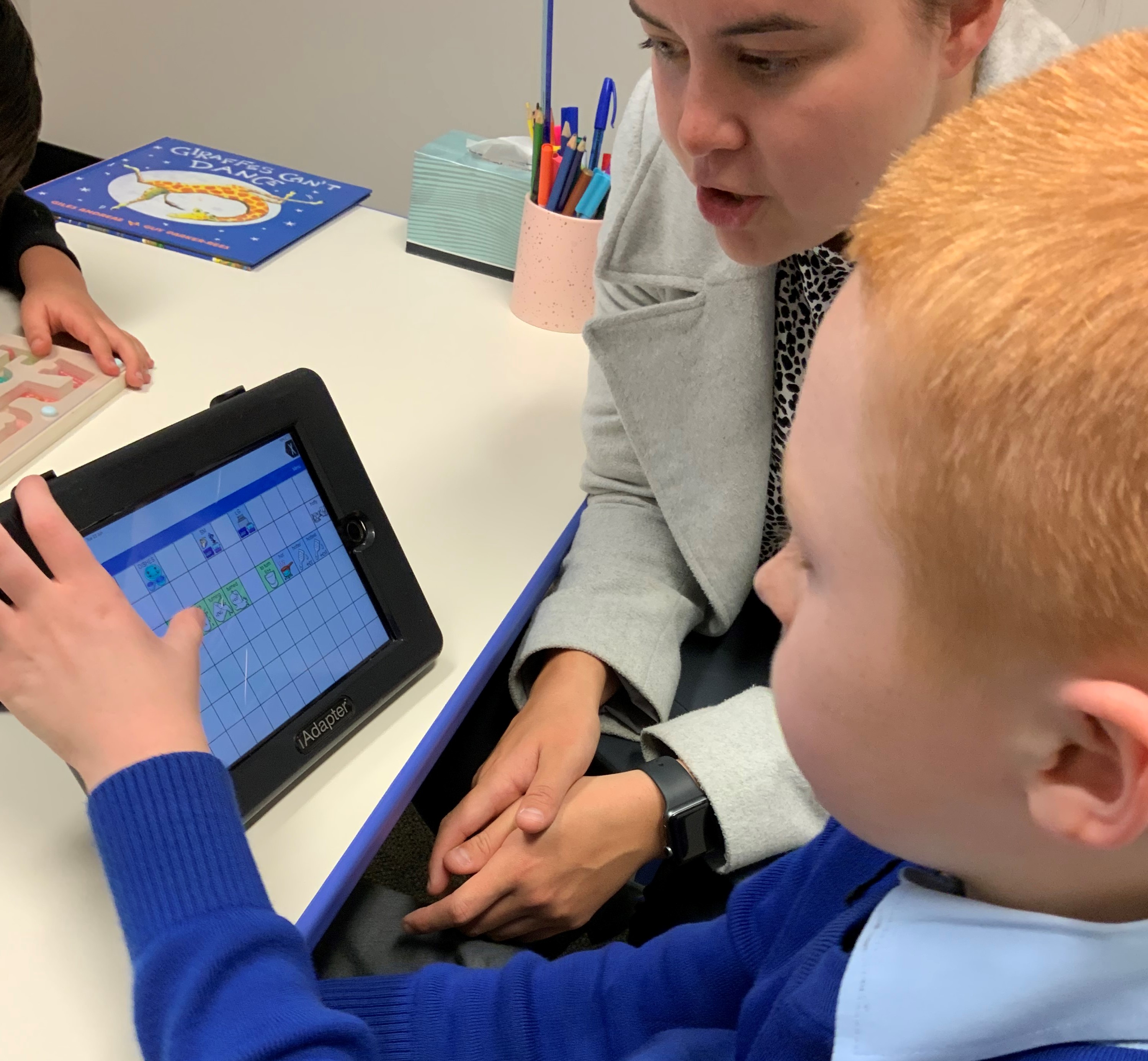 AT Chat recently caught up with mum, Kate, who shared her journey with autism and Augmentative and Alternative Communication (AAC) for her son, Benj. This is Kate's story.

In early 2016, we first saw a speech pathologist through the Child Development Centre, as Benj was not yet speaking at age four. The speech pathologist helped us start the process for an autism diagnosis and when we got the news, I just remember feeling lost and alone.

Where we were living happened to be one of the first WA trial sites for the NDIS. It was all a bit of a blur: we had a meeting with a planner, Benj got his NDIS plan and we started his therapy services.

One afternoon we were at the park, and I got talking to one of the Mums whose son also happened to have autism. It was great to talk to another parent, because at first you can feel like you’re all alone on this journey and the only one experiencing it. She began telling me about the specialist autism day-care her son was attending, and I immediately organised a visit.

A year later, we started at the Autism Association of WA’s ASELCC (Autism Specific Early Learning and Care Centre) which was co-located at the Mercy Care Early Learning Centre in Bedford. We just knew it was the right place for Benj. It was here that I met another Mum of a son with autism who is now my best friend. She has supported me through dark times and celebrated the successes of our journey with Benj.

Shortly after, we had a major turning point in Benj’s journey when our new occupational therapist mentioned exploring AAC to help with communication. Benj was already using a PECS (Picture Exchange Communication System) file and would pull off a card like his ‘Up & Go’ drink or ‘bag’ to show what he wanted. My first thought was, “No way! I don’t want to stop Benj from talking with his voice.” He had a few little words at that point, and in my mind, I thought using a device would stop that.

After further discussion and learning that AAC comes in different forms and works to support communication, we decided to explore creating a PODD (Pragmatic Organisation Dynamic Display) book. The goal was to help Benj to communicate not only his needs and wants, but to express comments such as greetings, feelings and much more.

I left that meeting feeling positive and quite confident that these introductions will help Benj, and us as a family. A week into having his PODD book, Benj had lots to say! He found the picture of McDonalds on the ‘Places’ page, then went to his PECS file and got the visual of a car. Using a combination of his AAC systems, Benj communicated “Let’s go in the car to McDonalds.” So off we went to McDonalds! 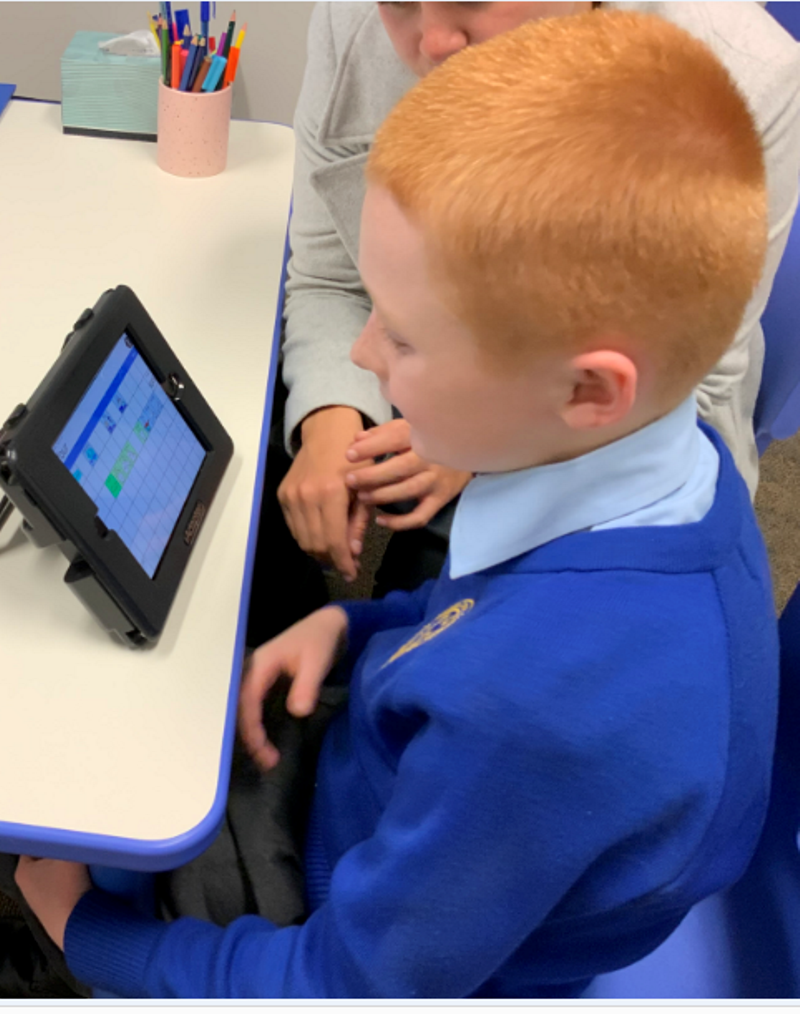 As we were reaching the end of 2017, Benj was also finishing up at the ASELCC and getting ready to transition to Pre-Primary. Our big goal for 2018 was to support Benj to access a more comprehensive high-tech AAC system during his next NDIS plan review.

2018 was a big year of firsts, and the year we put in an NDIS Assistive Technology (AT) application for Benj to trial and get an AAC device. This process involved working with Benj’s therapy team at the Autism Association of WA, and his school to keep a trial diary against communication goals for Benj to provide as evidence to the NDIS. When Benj got his first merit certificate at the school assembly, I was so proud of him, I cried. His teacher awarded him the certificate for ’Adapting to new routines and communicating his feelings using AAC and verbal modes of communication.’

While we waited for Benj’s NDIS AT application to be approved, we would often spend time with Benj’s PODD book. The first time Benj said, “I love you” was with his PODD. One Saturday we were on the couch and Benj was flicking through it, and we were talking about things – he usually points out cake, juice or McDonalds!!!  On this occasion though, we were looking at the ‘Feelings’ page and I asked Benj how he felt, and he pointed to happy.  I then said, “I love you” and pointed to the visual that said, “I love you”.  I kept doing this a few times, and each time I said it, he would point to the picture.  He then said “I oooo, I oooo”, which I interpreted as “I love you”, as he was pointing to the picture.

He then said “I oooo, I oooo”, which I interpreted as “I love you”, as he was pointing to the picture. Kate shared her feelings of amazement saying,

“I was amazed and pretty proud of him. In the past, there were times when I would think I would never hear those words. He’s got so much to say, he shows us little glimpses of it, and we know he’s got it in there.”

Over the past few years, Benj transitioned from a special education school to a mainstream school. He also got his AAC device funded through NDIS and uses an iPad with the application ‘Words for Life’. At school, one of the goals was greeting his teachers and classmates at the start of the day with his device. Benj’s ability to communicate, to say how he feels, or that he needs a break has been a real positive for school and home. He’s learning to understand and follow expectations in the classroom and when in the community too. 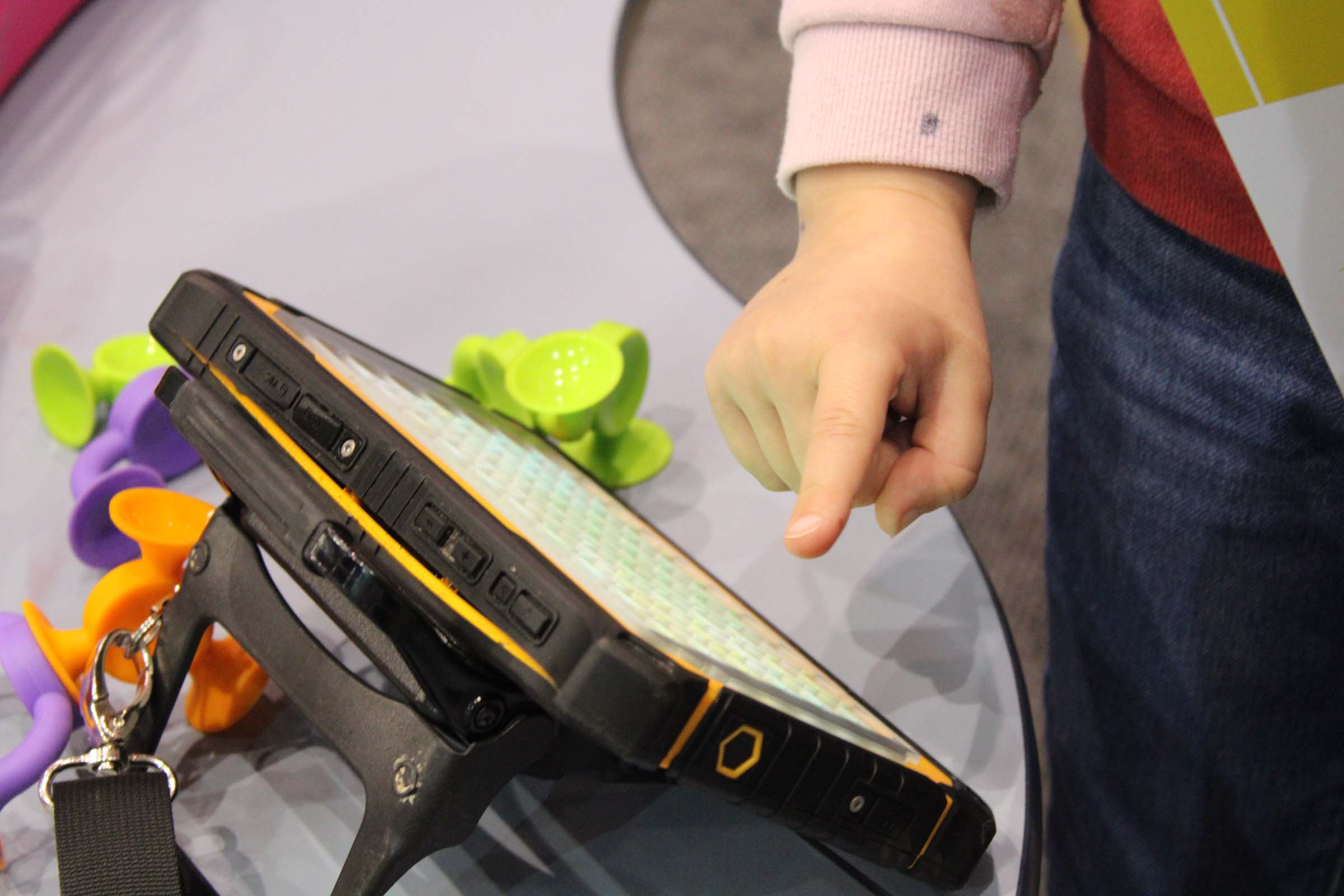 His communication is becoming more verbal, especially around everyday things like saying ‘Hi’ or saying he wants to eat or drink. But when he can’t say what he needs or he’s frustrated, he will use his device, and he’s very quick on it. His understanding of communication is growing too; we use a lot of ‘Social Stories’ to explain things like when we went into lockdown last year because of COVID-19, why he wouldn’t be going to school or why we had to wear masks. The language of the pictures and the words really helps his understanding.

You can just feel he’s got so much more to say, and we really want to work on that together. We’ll read stories together and he will point to the animals and say their names, and I feel like that’s Benj’s way of telling a story. For example, we were reading a story with sea animals and Benj said, “Fish, anchor, boat, shark – rarrgh!”

Over the years, I have learnt so much about what works for Benj and what doesn’t.  As a family, we have learnt to know when to push Benj and when to just let things go. He’s Benj, he has his own personality, sometimes he’s just being a little 8-year-old boy who doesn’t want to do something, and it has nothing to do with his autism. Our biggest focus now is working on conversation and commenting. Benj is really good at telling us what he wants, and we would love to hear his thoughts and comments on things.

Although this journey that we are on can be difficult at times, having a wonderful team of people to support us on it means it is a path that we do not have to walk alone. This support network alongside the right AT and opportunities to learn, gives Benj a fantastic foundation to live, play and work (school). I really hope sharing our story can help other families who are in that place, to know there is hope and that they are not alone.

The article was co-written with the Autism Association of Western Australia.

AT Featured in this story: 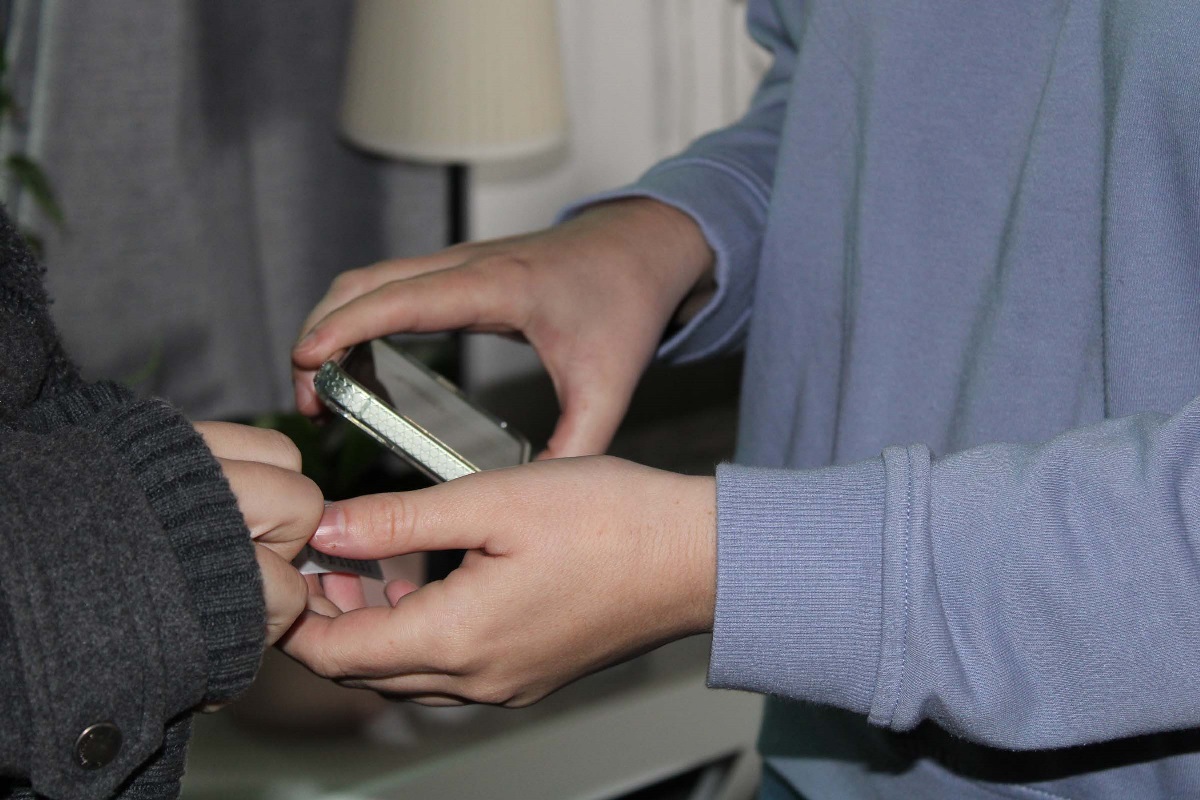 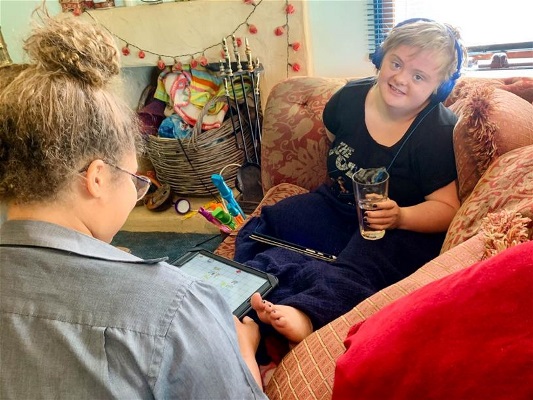 Sophie and her AT 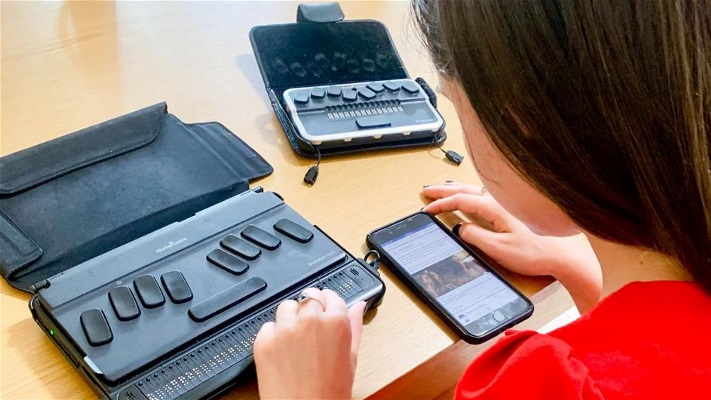 Connect with other AT users. 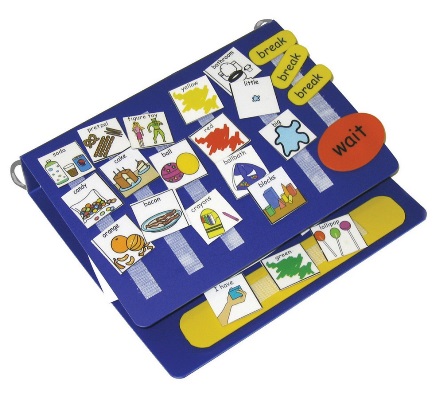 Discover AT for communication.